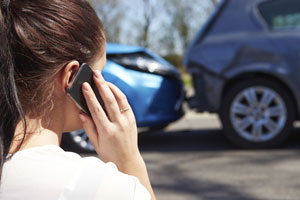 Multicar accidents are often more serious than typical car crashes involving just two cars. And navigating insurance and a personal injury claim is also more complicated when you are dealing with an accident that involved three or more cars.

One issue that can get muddy around multiple-car collisions is fault. For example, let’s say that in a chain reaction crash, the most common type of multicar collision, one car strikes another car from behind. The sudden stop then causes the cars behind the car that initially rear-ended the first vehicle to crash into it. Clearly, the individual who caused the first rear-end crash is the one at fault for all the other ensuing accidents in the multicar pileup.

Now, let’s look at another scenario. Let’s say that the front vehicle in the crash suddenly stopped for no reason, and this caused the other cars to crash into one another. Sometimes, a car will change lanes and slow way down, not giving those behind appropriate time to slow down.

Finally, sometimes the driver of the rear car that caused the collision will claim that there was actually another vehicle involved that rear-ended her. No one else has seen this car, but then no one else was looking in their rearview mirror for a car two or three or four cars behind. Again, this will need to be investigated.

Problems can ensue when the people who were really at fault deny they were at fault. Insurers and attorneys need to investigate closely all damage to the cars, interview witnesses and otherwise come to resolution about fault. However, this can take a longer time than for your typical two-car accident, for obvious reasons. Problems are compounded when all the insured drivers swear they are not at fault. Indeed, having an attorney in situations like these can be an enormous reassurance and make a great deal of difference in the outcome of a personal injury lawsuit.

Whether you have been injured in a multicar pileup or any other crash that was caused by another person’s negligence or carelessness, Maryland attorney Jonathan Scott Smith can help protect your rights while you focus on getting the medical treatment you need to recover. Mr. Smith has been fighting for the rights of the injured in the Baltimore and Washington, D.C., metro areas since 1984. He will leave no stone unturned in an effort to build a strong personal injury case on behalf of his clients.

Mr. Smith has been included on the Maryland Super Lawyer List and has earned a 10.0 Superb rating as a litigation attorney from AVVO, the AV-Preeminent™* Peer Rating from Martindale-Hubbell Law Directory, and the Clients’ Choice Award from AVVO based on average client reviews of 5 stars — the highest client review possible. He has also been named a Top-Rated Lawyer by The American Lawyer magazine and Martindale-Hubbell (2012).