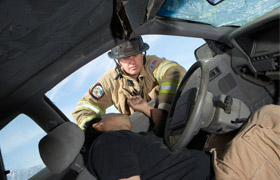 A 26-year-old Prince George’s police officer died in the early hours of March 7 when he lost control of his police vehicle and crashed into a fence near the corner of Greenbelt and Good Luck Roads in Lanham. According to fellow officers, the young officer was off-duty at the time and was taking his girlfriend home when he saw a motorist driving at a high rate of speed. Police Chief Mark A Magaw said that the officer called in to report the speeding vehicle and told dispatchers, “I have to stop this guy before he kills somebody.”

A woman who was in the cruiser with the officer told officials that she thought he was going to slow down when he lost control of the vehicle and struck the wooden privacy fence. The woman was treated and released for minor injuries. The driver of the other vehicle never stopped.

Prince George’s Police Department officials say the officer’s dashboard mounted camera was broken at the time of the accident. They say, though, that witnesses may have seen a tour bus in the vicinity of the crash.

The deceased officer had been with the Prince George’s Police Department for less than two years.

Attorney Jonathan Scott Smith, a Maryland Super Lawyer, has fought for the rights of personal injury victims in Maryland for more than 30 years. Because of his record and reputation for effective representation, he has been awarded the Client’s Choice Award from AVVO, based on an average client review of 5 stars (the highest rating possible). He has a perfect 10.0 Superb rating as a litigation attorney from AVVO, and has also built an outstanding reputation with his colleagues in the legal profession, earning an AV-rating under Martindale-Hubbell’s Peer Review Rating System. Smith was also recognized as a 2012 Top-Rated Lawyer by The American Lawyer Magazine and Martindale-Hubbell.

Regardless of the charges you face, we will aggressively protect your constitutional rights. Contact us by e-mail or call us at 410-740-0101 to schedule an appointment. We represent criminal defendants in Howard County, Baltimore County, Carroll County, Frederick County, Prince Georges County and Montgomery County in Maryland.