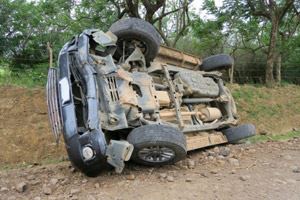 In 2000, the myth of SUVs being safe cars was revealed as fiction, when statistics revealed they were among the most dangerous cars on the road when it came to rollovers. Their height and weight contributed to the rollover potential and seriousness of injuries when crashes did occur.

However, SUV manufacturers have since taken steps since that time and it appears that SUVs are the least likely to be involved in deadly rollovers. In fact, in 2009, an Institute of Highway Safety Report revealed a dramatic reduction in deadly rollover accidents.

SUV manufacturers took great interest in making their motor vehicles as safe as possible, by adding an electronic stability control system that kicks in when SUVs must make abrupt turns or when they are skidding on slippery roads. Nonetheless, rollover accidents are 27% more likely to occur in an SUV, with more than 61% of SUV fatalities resulting from an SUV rollover crash.

When SUV rollovers do occur, serious injuries, sometimes fatal, do result. Roof intrusion and roof contact injury, meaning that the accident victims have been slammed into the roof either due to the roof crashing in on them or them falling from gravity into the roof, can result in traumatic brain injury (TBI), including concussion and permanent brain damage, as well as open head wounds.

Head and brain injuries both serious and minor, are the most common types of injuries that occur when there is a rollover crash with an SUV. If you have suffered a serious injury or if a loved one has been injured as a result of an SUV rollover accident caused by someone else’s carelessness or recklessness, you may have reason to seek recovery through a personal injury legal claim.

If you or someone you love has been hurt because of the carelessness or negligence of another person, we can help. Contact us by e-mail or call us at (410) 441-5054to schedule an appointment. We represent personal injury victims in Howard County, Baltimore County, Carroll County, Frederick County, Prince Georges County and Montgomery County in Maryland