SMOKE ALARM MUST BE SEALED—LANDLORD CAN BE CITED, FINED OR EVEN INCARCERATED

Under the Maryland Smoke Alarm Law, enacted in 2013, Maryland homeowners, including landlords, must install tamper-resistant smoke alarms. The required alarms have a sealed 10-year battery that cannot be removed. The alarms have a temporary hush button to allow them to be reset after a non-emergency alarm, such as cooking steam or smoke. A building owner or even a tenant in an apartment may be charged with a misdemeanor for failure to have the proper alarm installed. Penalties include 10 days in jail and a potential fine of $1,000. 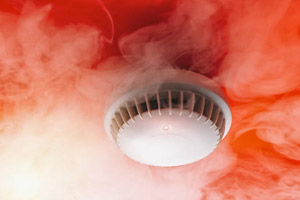 Landlords and residents can also be civilly liable for any injuries suffered in a fire, should a home or apartment not have the required smoke alarm.

Jonathan Scott Smith, a Maryland Super Lawyer, has aggressively represented personal injury victims in and around the Baltimore metropolitan area for more than 30 years. He is a skilled, experienced and respected trial lawyer with reputation for getting positive results at trial.

Attorney Smith has earned a 10.0 (Superb rating) as a litigation attorney from AVVO, as well as AVVO’s Client’s Choice Award from AVVO, with an average client review of 5 stars. Smith has been named one of the top 100 lawyers in Maryland by Super Lawyers, and was listed as a Top-Rated Lawyer by The American Lawyer Magazine in 2012. The American Institute of Personal Injury Attorneys listed him as one of the “10 Best Attorneys in the State of Maryland in Client Satisfaction.” He belongs to the Million Dollar Advocates Forum, given to less than 1% of all American lawyers who have obtained million dollar judgments, awards or settlements.