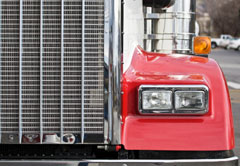 An 18-wheeler that could not stop in time rear-ended another vehicle, starting a chain reaction that involved 10 motor vehicles, according to news reports. In the aftermath, though seven people were injured, no one died. The accident occurred at about 1:30 p.m. on Thursday, September 26, shutting down both lanes and backing traffic up for miles on one of the busiest interstates connecting Maryland and Pennsylvania. The collision involved five cars, four tractor-trailers and a tow truck. The cleanup took almost seven hours.
Police have not released any information regarding their investigation, but a Pennsylvania State Police officer said that investigators would start with a thorough investigation of the truck and driver that started the chain reaction. They took blood samples to determine whether alcohol or drugs were involved, and will examine the truck to determine if there was vehicle failure.

Attorney Jonathan Scott Smith, a Maryland Super Lawyer, has fought for the rights of personal injury victims in Maryland for more than three decades. Because of his record and reputation for effective counsel, he has been awarded the Clients’ Choice Award from AVVO, based on an average client review of 5 stars (the highest rating possible). He also has a perfect 10.0 Superb rating as a litigation attorney from AVVO, and has been recognized by his colleagues in the legal profession, earning an AV rating under Martindale-Hubbell’s Peer Review Rating System. Smith was also cited as a 2012 Top-Rated Lawyer by The American Lawyer magazine and Martindale-Hubbell.

We will help you aggressively seek damages for all your losses. Contact us by e-mail or call us at (410) 441-5054 to schedule an appointment. We represent injured people in Howard County, Anne Arundel County, Baltimore County, Carroll County, Frederick County, Prince George’s County and Montgomery County in Maryland.