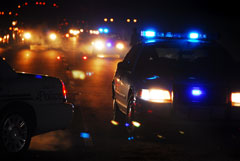 Two people were seriously hurt in a two-vehicle car crash near Route 100 West and Catherine Avenue in Pasadena on September 21, 2013, according to news reports. The car accident occurred just before 2 a.m.

Police believe that the two vehicles, a 2011 Nissan Altima and a 2008 Ford Ranger, were both traveling westbound on Route 100 when the Nissan hit the Ranger’s right rear corner, causing the Ford to spin out of control and travel into a small wooded area in the median. The Nissan also spun, overturned and came to rest in the median. The driver of the Nissan was thrown from his vehicle and landed in the median. Both drivers were transported to the University of Maryland Shock Trauma Center and were listed in critical but stable condition.

Though the investigation remains underway, initial indications are that alcohol and excessive speed contributed to the crash. Police also believe that one or both drivers were not using seat belts at the time of the car crash.

Jonathan Scott Smith, a Maryland Super Lawyer, brings more than three decades of experience to injured people throughout Maryland. He is the recipient of the Clients’ Choice Award from AVVO, based on an average client review of 5 stars (the highest rating possible), and also carries a perfect 10.0 Superb rating as a litigation attorney from AVVO. He has an outstanding reputation with his colleagues in the legal profession, earning an AV rating under Martindale-Hubbell’s Peer Review Rating System. Smith was also recognized as a 2012 Top-Rated Lawyer by The American Lawyer magazine and Martindale-Hubbell.

We will aggressively seek full and fair compensation for all your losses in a car crash. We represent injured people in Howard County, Anne Arundel County, Baltimore County, Carroll County, Frederick County, Prince George’s County and Montgomery County in Maryland. Contact our office online or call us at (410) 441-5054 to schedule an appointment.