Police in Prince George’s County are still trying to determine the cause
of a single-vehicle car accident that took the life of a Hyattsville woman in late September, 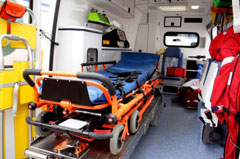 announced Prince George’s County Police. The victim was apparently traveling northbound on Baltimore Avenue at Wells Parkway in University Park around 7 p.m. on September 22, 2013. Witnesses say that she crossed the southbound lanes and struck a curb, went over a bridge and down a ditch, and flipped the vehicle, landing in a creek. The driver was transported to a nearby hospital, where she was pronounced dead. Three other passengers in the vehicle were taken to the hospital with non-life-threatening injuries.

Jonathan Scott Smith, a Maryland Super Lawyer, brings more than 30 years of experience to personal injury victims throughout Maryland, including fatal car accident cases. Because of his record and reputation for effective representation, he has been awarded the Clients’ Choice Award from AVVO, based on an average client review of 5 stars (the highest rating possible). He has a perfect 10.0 Superb rating as a litigation attorney from AVVO, and has also built an outstanding reputation with his colleagues in the legal profession, earning an AV rating under Martindale-Hubbell’s Peer Review Rating System. Smith was also recognized as a 2012 Top-Rated Lawyer by The American Lawyer magazine and Martindale-Hubbell.

If a loved one has died in a fatal car accident, or you have been hurt in an accident resulting from the wrongful act of another person, we can help. To set up an appointment, contact us online or call our office at 410-740-0101. We represent injured people in Howard County, Anne Arundel County, Baltimore County, Carroll County, Frederick County, Prince George’s County and Montgomery County in Maryland.