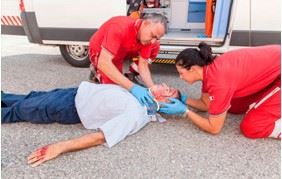 A passenger in a vehicle driven by a 67-year-old woman was killed when the Nissan in which he was traveling collided head-on with a Ford Ranger pickup truck. The crash occurred near Lakeland Drive on Rt. 32 in Finksburg. Police say that the driver of the Nissan was headed southbound on Sykesville Road when she crossed the center line at a curve and hit the pickup, of a Finksburg resident.

The passenger was declared dead on the scene. Both drivers were flown by helicopter from the scene and were reported in critical condition at the University of Maryland Shock Trauma Center.

Attorney Jonathan Scott Smith, a Maryland Super Lawyer, has fought for the rights of injured people in Maryland for more than 30 years. Because of his record and reputation for effective representation, he has been awarded the Client’s Choice Award from AVVO, based on an average client review of 5 stars (the highest rating possible). Smith has a perfect 10.0 Superb rating as a litigation attorney from AVVO, and has also built an outstanding reputation with his colleagues in the legal profession, earning an AV rating under Martindale-Hubbell’s Peer Review Rating System. Smith was also recognized as a 2012 Top-Rated Lawyer by The American Lawyer Magazine and Martindale-Hubbell.

At the law office of Jonathan Scott Smith, we have the skill, knowledge, experience and resources to help you get full and fair compensation for a personal injury. Contact us by e-mail or call us at (410) 441-5054 to schedule an appointment. We represent criminal defendants in Howard County, Baltimore County, Carroll County, Frederick County, Prince George's County and Montgomery County in Maryland.