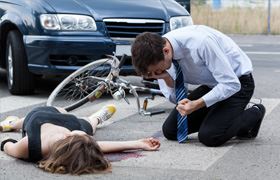 Anne Arundel Fire and Emergency responders were called to the northbound Baltimore Washington Parkway around 2:30 am Tuesday morning, March 22, in the aftermath of a single car accident between Routes 175 and 32. Police say a 2012 Ford SUV collided with a 2007 Jeep, leaving the driving of the Jeep trapped in his vehicle. EMS personnel had to use the “jaws of life” to get him out. One of the victims was air-vacced to Prince George’s Hospital Center, but the injuries were not perceived as life-threatening. Three others were taken by ambulance to Baltimore Washington Medical Center with minor injuries.

Attorney Jonathan Scott Smith, a Maryland Super Lawyer, has protected the rights of injured people in Maryland for more than 30 years. Because of his record and reputation for effective representation, he has been awarded the Client’s Choice Award from AVVO, based on an average client review of 5 stars (the highest rating possible). He has a perfect 10.0 Superb rating as a litigation attorney from AVVO, and has also built an outstanding reputation with his colleagues in the legal profession, earning an AV-rating under Martindale-Hubbell’s Peer Review Rating System. Smith was also recognized as a 2012 Top-Rated Lawyer by The American Lawyer Magazine and Martindale-Hubbell.

If you have been hurt because of the wrongful act of another person, you want experienced and effective legal counsel. Contact the law office of Jonathan Scott Smith by e-mail or call us at (410) 441-5054 to schedule an appointment. We represent injured people in Howard County, Baltimore County, Carroll County, Frederick County, Prince George's County and Montgomery County in Maryland.