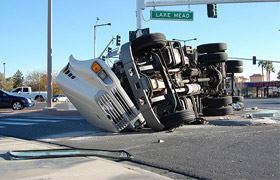 A tractor-trailer crossed the center line near the 1700 block of Bel Air Road on Friday, January 27, causing a 14-car pileup. At least seven people were taken to the hospital with non-life threatening injuries.

According to witnesses, the car-carrier was southbound on Route 1 when it suddenly careened over into the northbound lane, hitting a number of passenger vehicles. The driver of the truck, who asked that his name not be given, said he took evasive action to avoid hitting another vehicle that crossed his path. One spectator said that the large commercial vehicle appeared to be airborne at one point.

Maryland Super Lawyer Jonathan Scott Smith has aggressively represented personal injury victims in Maryland for more than 30 years, including people who have been hurt in a motor vehicle accident. He understands the impact a personal injury can have on every aspect of your life and will work hard to get full and fair compensation for all your losses.

Because of his record and reputation, he has been a multiple recipient of the Client’s Choice Award from AVVO, based on an average client review of 5 stars (the highest rating possible). He has a perfect 10.0 Superb rating as a litigation attorney from AVVO, and is also respected by his colleagues in the legal profession, who have given him an AV-rating under Martindale-Hubbell’s Peer Review Rating System. Smith was also recognized as a 2012 Top-Rated Lawyer by The American Lawyer Magazine and Martindale-Hubbell.

We offer comprehensive counsel to anyone who has been hurt in a car, truck or motorcycle accident. Contact us by e-mail or call us at 410-740-0101 to schedule an appointment. We represent criminal defendants in Howard County, Baltimore County, Carroll County, Frederick County, Prince Georges County and Montgomery County in Maryland.